This week on the 25th November 2012 – 7 Years ago, I qualified as a professional toastmaster with the Guild of International Professional Toastmasters. Since then I have become a very experienced toastmaster, in fact one of the most experienced. However, I had to wait until early April 2013 before I did my first gig, a wedding for Amanda and Claire, but from then on I hit the ground running very hard and fast and have enjoyed every minute of my chosen profession.

It has taken me to many countries in Europe including Austria, Belgium, Germany, Italy, Spain and Switzerland as well as the United States and has had me work and stay in some truly amazing venues, from the classy Blenheim Palace in Oxfordshire, to the incredible JW Marriott resort on the Isola del Rose, Venice. I work regularly in many of the iconic halls in the City of London, but could also be working in a humble marquee in a back garden, and then of course there was Caesar’s Palace in Vegas. (Neither iconic nor humble, so you can decide what that is for yourself!)

As an experienced toastmaster I have met and worked with some inspirational people, many of them charity workers or sportsmen and women. However, I have also had the privilege to serve and guide at events where senior members of the Royal Family (Her Majesty The Queen (both real and stand in), His Royal Highness, The Prince Philip, Duke of Edinburgh and Her Royal Highness The Princess Royal) have been present. 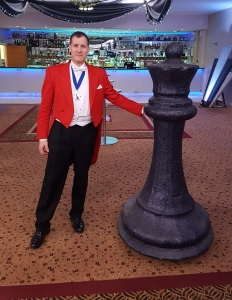 Just one of the many Queens The Man in the Red Coat has worked with!

I have assisted at weddings of all cultures and religions. Muslim, Hindu, Sikh, Jewish and of course Christian and these have been for British, African, Asian – both near and far, Russian, Greek, even Moroccan, and whilst it is only an English county it can be considered a place of its own – Essex!

As for awards ceremonies, some have been the national type, whilst others have been in house, celebrating success of staff members and their achievements. In some cases I have facilitated them completely, calling up individuals who will hand over a specific award, whilst in others I have played tag/warm up with a celebrity who does the main facilitation. In each case I pride myself on getting the events started on time and run to time.

Then there are charity events – massive and small fundraisers. I am not just an experienced toastmster as in many cases I have also been the Auctioneer raising over a million pounds now for good causes. Silent auctions, raffles, sweepstakes and games of “heads and tails” have all featured under my guidance, all raising money.

Additionally I have been asked to contribute with experience and knowledge in so many ways. I have been invited to speak “after dinner” as well as on cruises (something I may do in future years). I have also contributed to books and articles about dining, weddings and events in general.

None of this would have been possible without the Guild qualification, nor would I have ever had the chance to work in the greatest City in the world for special events. Dining in the City of London is in a league of its own and banquets and dinners generally happen in the most iconic surroundings. The catering teams that operate in the City know how to do pomp and ceremony in such style as to be something unique and in many ways there is also something comforting about their delivery and formality. Had I not qualified as a toastmaster there is no way I would have become a Beadle, a role that I love, to 4 out of the City’s 110 Livery Companies, plus one in waiting. The City Liveries with all their traditions, support their trades and make so much money for charity. However, they also uphold many of the City’s ceremonies and the way of doing things and they give me the chance to really use my training in its most honest and formal style, something that is not always the case at a wedding or an awards ceremony. 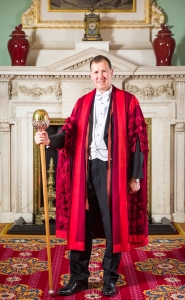 Along the way I have made so many new friends, not only from clients, but also from some of the great suppliers I get to work alongside. Many have opened my eyes and ears to the rich diversity that this amazing country of ours holds and something I might not have otherwise have experienced. It is great to be able to say that among my new friends are Imams, Pandits, Rabbis and Priests of many religions. Talented caterers, photographers and DJ’s who can get any party going and not to mention other toastmasters and Beadles. What I find great is the respect so many of us have for our own strengths when we work together. I cannot make a room dance, but I can get it quiet for all to listen. Yet the DJ’s know that they only appeal to half an audience so are really keen to let me do my bit before passing a well-controlled baton in their direction.

So where did the time go? It seems like only yesterday that I was sitting with a pair of colleagues trying to work out in what order a particular group of people should be announced, as we were being trained in the skills of etiquette and protocol by the guild. I am also blown away that I have been Toastmaster of the Year for 2019. Something I am very proud of and feel that my hard work in promoting not just myself, but also the strengths in general of using an experienced toastmaster can make to any event.

I have many people to thank on this journey that I have taken. To Bob Parker and Phil Gardner of the Guild of International Professional Toastmasters for their training and support. To Amanda and Claire for that first gig. To Ken Tappenden, the City Toastmasters Toastmaster who allowed me to shadow him at an event at the Guildhall and who gave me the confidence to take the role by the horns. To Adele Thorpe, who eats, sleeps and breathes the City and who gave me that first shot at one of her events, and for whom I shall be working for once again this week. Lastly to the Worshipful Company of Marketors who invited me to become their Beadle. Without that door opening to the City I would never have the other opportunities that have now followed.

With those above that I have thanked in mind I am now paying it forward to another who I believe will be a great Toastmaster and hopefully Beadle too. So to Rod Brafield, who is currently shadowing me at several events I wish you all the luck and hopefully the success that I have had in this wonderful profession that we have entered into.

Finally, I have to wholeheartedly thank my wife Rebecca, who not only supported me throughout my initial transformation into the role, but also continues to do so. We have a daughter, Maddie, who is 9 this year, but with so much of the work that I do taking up weekends and late nights it does leave Rebecca almost in the space of single parent, which is tough. So to her and Maddie, my eternal thanks.

So what next for the Man in the Red Coat? Well more of the same, with perhaps a few less weekends. I already do many events as “Voice of God” in conjunction with my toastmaster duties. However, with this in mind I am also now expanding out into the world of the professional voice artist/voice over, having been asked to narrate some corporate productions. I now have a small studio at home from where I can record professionally and can be reached at James Hasler Voice.

Additionally I continue my role as principal consultant for HaslerHill Consulting, a company set up to provide event “Moderation, Facilitation and Curation”, as well as presentation and public speaking training to a different clientele that would otherwise be considering the Man in the Red Coat.   Therefore regardless of the type of communication you may need, whether live or pre-recorded, with or without a heightened level of etiquette and protocol, I am sure to be able to help.

Toastmaster James Hasler – The Man in The Red Coat

Thanks to all my clients past, present and future and here is to another 7 years.

James Hasler is a professional event/conference host, moderator and facilitator. He is also a Master of Ceremonies, Charity Auctioneer and “Voice of God” and is well-known as The Man behind “The Man in the Red Coat”, a Professional Experienced Toastmaster. Additionally as this article mentions he is a City of London Livery Beadle. He has facilitated events all over the UK, as well as throughout Europe and the United States and is the 2019 Toastmaster of the Year.