Culturally there are going to be big differences here for all of the following, but what follows is a basis that could work at any wedding breakfast (or dinner) that has a seating plan.

So let’s begin with the seating plan itself. How these are created are totally up to the choice of the couple. However, there things to remember.

Nowadays you can set the tables as you like. As long as the plan is clear, that is the most important thing.

Now that everybody has viewed the table plan they need to be called to take their seats. If a Receiving Line has not be done as the guests initially arrived (as is often the case as it is not always practical) then now is the other time to do it, if one is to be held.

What is a Receiving Line?

It is a way that all the guests get to formally say hello to the Bride and Bridegroom and their parents.

Who should be in the Receiving Line?

Basically the top table as above. However, the Best Man and Maid of Honour are optional as they may be attending to other duties.

What happens at a Receiving Line?

Each Guest gives their name to the Toastmaster or Master of Ceremonies, who will call their name out loud so that all within the Receiving Line can hear it.  They proceed to the first person in line (the Bridegroom), say hello, shake hands or peck on the cheek if appropriate and then move on to the next person (the Bride). This is repeated with the whole line and then the Guest goes into the Wedding Breakfast to find their seat.

The rules state no conversation is to be entered into. You should also present your invitation to the Toastmaster or Master Ceremonies.

Nowadays many do not bother with a receiving line. This I think as shame, as having one means everybody gets seen by the Bride and Bridegroom. Also the addition of a “high five” has been added to the list of things that it is appropriate to do. Finally, whatever name you give to the Toastmaster or Master of Ceremonies, is the name they will call out. There’s always one who wants to be “Mickey Mouse”! It can be a lot of fun though. Needless to say nobody ever remembers their invitation these days!

So everyone has made their way through the Receiving Line and they have found their place at table. We now have to get the line itself into the room. For the Parents this can be done in one of two ways. They can subtly make their way to table or they can be formally announced into the room. I prefer the latter as it shows their place and allows them their 5 seconds of fame.

Once the Parents are “installed” it is time to get the Bride and Bridegroom in. The room should be standing as they come in and make their way to the top table. (If a Toastmaster is present he will have briefed them all as to what is to happen.) If a grace is to be said it will be done before all take their seats. However, grace or not, the Bride must be sat first. Once she is seated all the rest are invited to take theirs also. This is likely to be the point that the Bride may decide to grant permission for the Men to remove their jackets and for the Women who have them, to remove their fascinators. 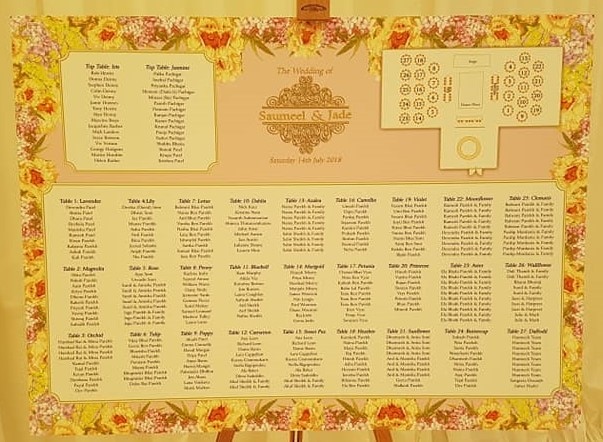 Food service commences and at the end of desert then speeches may be held. If there is a coffee course and the Loyal Toast to Her Majesty the Queen is being proposed then this would happen between desert clearance and coffee. (Before the speeches)

Once all are completed then it will be time to cut the cake, followed by dancing and revelry.

How is the cake cut?

Being flippant, with a knife! However, etiquette states that it is the Bride who always holds the knife, but her husband wraps his hands around hers “for guidance”. (How wonderfully patronising!)

What happens these days is a grace is being said less and less. However, I regularly read a non-secular one that I will have created and is relevant to the day. They are designed to make people smile, rather than be repentant, but also to make people think of others less fortunate than themselves, whilst at the same acknowledging a blessing on the occasion.

Toasts to her Majesty are now very rare, except at Jewish Weddings where loyalty to our Sovereign and to the President of the State of Israel are always observed with a loyal toast to each. (Separately)

Speeches also seem to move around quite a bit. They sometimes take place at the very beginning of the meal and or even between courses. (I have done a separate blog all about the etiquette of wedding speeches which you can refer back to here.) Additionally it is also quite common these days for couples to cut the cake as soon as they enter the Wedding Breakfast before going to take a seat. This last note is very popular in Indian culture.

Does any of this matter? Well some of the behavioural items should really be observed or at least acknowledged. As for the order of running. No, with the exception of a loyal toast if one is to be given, none of it is vital as long as the schedule is clear.