As mentioned in the last chapter, most bridegrooms I work with are almost clueless with regards to their wedding. The Bride has said do it and they have. However, whilst this is very common, there are some who are punching well above their weight and go above and beyond what etiquette requires them to do.

So what does etiquette say about their roles?

Well before it all gets underway there are a couple questions and a certain item of jewellery to get sorted.

First, before even asking his Bride, he should seek the approval of his prospective Father-in-law by asking for the hand of his daughter in marriage. Assuming that approval is granted, he must then procure an engagement ring and then if the first question didn’t cause him enough in the way of nerves and stress, he must pop the question to his beloved.

Now that the engagement is on and the Bride is busy planning the wedding he does have one of two things he needs to arrange himself.

He has joint responsibility with the Bride over choosing the wedding venue and photographer. He must also with help from his parents create the Bridegroom’s family guest list. This he should then present to the Bride’s Mother for processing. While the Bride needs to work out with her Father how to get to the ceremony and reception, the Bridegroom is obviously responsible for how he get there too. However and more importantly he is responsible for sorting the “going away” transport for himself and his Bride. This may or may not be a surprise to the Bride. (The transport, and hopefully not that he has done it!)

On the day itself he should arrive at the ceremony space at least 20 minutes prior to it taking place. 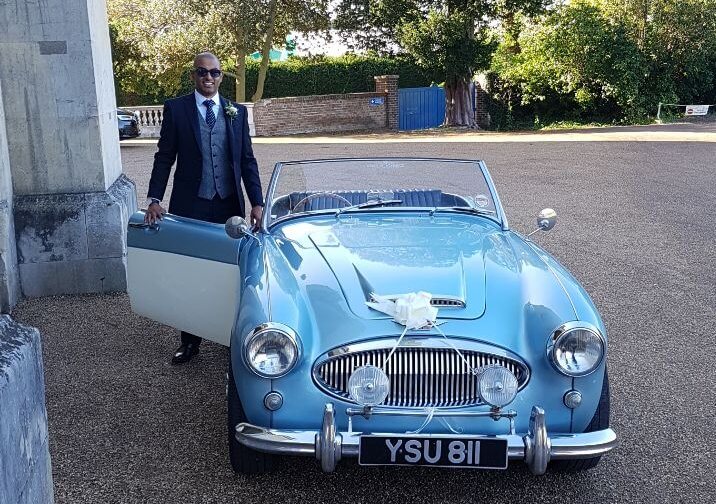 Once the register is signed and they are officially Man and Wife he should walk his Wife up the isle with her on his left (leaving his right arm – his sword arm, available to draw his sword should he need to protect her!).

Once at the venue, like and with his Bride he will form part of a receiving line to greet Guests.

Following the speech by the Father of the Bride, the Bridegroom will respond to the speech, by first thanking him on behalf of him and his new wife for the toast he has just proposed and then he would thank his Parents-in-law for allowing him to marry her. He would also thank everybody involved with the production of the wedding finishing by thanking the Bridal Party after which he will propose a toast to them.

Once the speeches are concluded the cake is to be cut and here he will let his Wife hold the knife but he will wrap his hands around hers, “giving her guidance”.

Then it is time to dance. Traditionally he would have initially asked his Mother-in-law to dance first. During the dance his Father-in-law would “cut in” leaving him free to lead his Wife onto the dancefloor for their “first dance”.

In reality, like the Bride in chapter 3, 90% of this is still done. The biggest changes in this modern world being, the frequently dropped receiving line, and in particular the dance order. This is normally done as follows in this day and age.

3rd The rest of the world! Party on.